Josh started playing guitar at age 12, after brief stints playing saxophone and drums. He was instantly attracted to the sounds of progressive rock and heavy metal when a friend bought him the Rush album “2112” for his 11th birthday. He was a self-taught player until 1991 when he started taking lessons with guitar legend Scott McGill.

In college Josh studied music composition and education, with classical guitar as his instrument. It is also in college where he met his songwriting partner Mark.

Today, Josh is concentrating on his jazz and composition studies. His goals are to be able to improvise to his own satisfaction in a jazz format, write that one progressive rock masterpiece, and to someday be able to play everything he hears in his head. 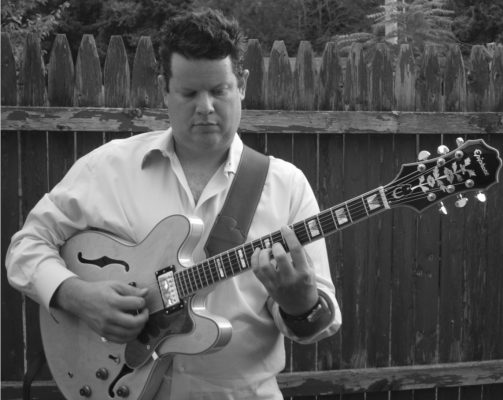 Favorite Food: Steak, baked potato, grilled shrimp, and a ton of A-1 sauce! Any of the Thai food my wife cooks.

Most likely to be heard saying: “We sell that.”

Unusual Fact: I’m blind in one eye. (It enhances my sex appeal.)